Collaboration with Other Academic Institutions 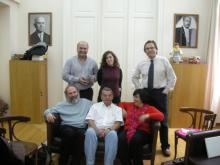 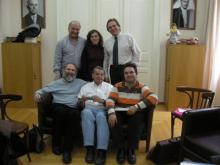 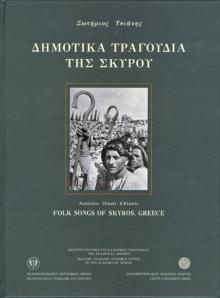 The Centre collaborates with other research and academic institutions in Greece and abroad.  Since its inception, the Centre has contributed to the teaching of folklore at the Universities of Athens and Thessaloniki, in the persons of Stilpon Kyriakidis, Georgios Megas, Demetrios Petropoulos and Georgios Spyridakis, all former research staff of the Centre.  It has also played an important role in the establishment and membership of scholarly societies such as the Hellenic Folklore Society, the Greek Society for Ethnology and other such bodies.

The Centre places its material and the academic expertise of its research staff at the disposal of researchers, Greek and non-Greek, doctoral candidates, and postgraduate students.  It also accepts undergraduates from various universities and other tertiary institutions who wish to do their practicum at the Centre, thus helping them acquire work experience in a research environment.  It has received undergraduate students from various departments of the Panteion University of Political and Social Sciences, the Department of History, Archaeology and Social Anthropology of the University of Thessaly, the Department of Social Anthropology and History of the University of the Aegean, the Department of Popular and Traditional Music of the Technological Educational Institute (T.E.I.) of Arta, the Department of Conservation of the T.E.I. of Athens and other university departments.

The Centre collaborates with cultural and academic institutions in the  organization of exhibitions and cultural activities and in the publishing of books.  It is happy to offer its academic expertise and is very happy to assist any worthwhile initiatives in the provinces of Greece.  Such initiatives in the past have included collaboration with the following institutions and bodies:

The Peloponnesian Folklore Foundation: Collaboration here resulted in the publication of Dhemotika Tragoudia tis Skyrou/ Folk Songs of Skyros, Greece:  An Ethnomusicological Publication by musicologist Sotirios Tsianis (in Greek and English, 2003) and of volume 14 of the journal Ethnografica.

The Greek Olive Museum at Kapsaliana, near Rethymno in Crete, as part of the RAPHAEL programme.

The Musιe de l’ Olivier at Nyons in France, the Instituto d’ Estudios Sociales Avanzados (IESA) in Barcelona, Spain, the Municipality of Arcadi in the province of Rethymno and the architect, Myron Toupoyiannis:  This project took place as part of the RAPHAEL programme, The Greek Olive Museum at Kapsalianα, near Arcadi in the province of Rethymno, Crete (1997-1999).  As part of the same programme, the Folklore Centre organized and held a conference on the topic of ‘The Olive and Olive Oil in Space and Time’, over 24-26 November 2000, at Preveza, in conjunction with the Aktia Nikopolis Foundation.

The Centre also made a short film entitled Elaia Kallistefanos/ The Olive “Kallistephanos” (Olive of the Lovely Crown), which it presented to Athens 2004, the body in charge of the 2004 Athens Olympics.  The film was awarded a prize for its script by the Athens 2004 Committee and the magazine Archaeology and Arts.  The script was written by Nikoletta Goulν and the music by G. Kouroupos.  It had its public premiere in March 2003.

The Bread Museum, Amphikleia, Phthiotis (1998-2003): Aided by the academic support of the Folklore Centre, the Cultural Association “Dadiotiki Estia” has created a unique museum devoted to the history of bread, which covers all aspects from the cultivation of cereals to the variety of different types of bread to be found in the eastern part of central Greece.  On 23 November 2002, the Museum was opened, in the presence of the Provincial Prefect of Phthiotis, the Mayor of Amphikleia and representatives of various cultural bodies.

The Museum of Agricultural Implements and Traditional Technologies at Velestino, Thessaly.

The Hellenic Organization of Small Medium Sized Enterprises and Handicraft S.A. (E.O.M.M.E.X.): Collaboration took place over the creation of an electronic catalogue of active traditional handicraft workshops in Greece, as part of  the Operational Programme of Industry, Action line 4.2.8.

The Institute for Language and Speech Processing: This joint venture was part of the European Community programme Sappho.

As part of the Acrinet/Culture 2000 programme, the Centre worked in conjunction with the Hellenic Ministry of Culture,  via the Museum of Greek Popular Musical Instruments, the Universite de Paris I, Pantheon, Sorbonne, the Consejo Superior de Investigaciones Cientificas of Barcelona, the Istituto Ellenico di Studi Bizantini e Postbizantini of Venice, the University of St. Clement of Ohrid in Sofia, Bulgaria, and the Municipality of Pelekanos, Hania, Crete.  As part of the same programme, an exhibition was mounted at the Byzantine and Christian Museum of Athens over 16-30 April 2004 on The Acritans of Europe (www.acrinet.net).