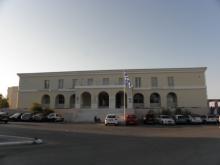 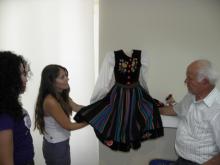 The Exhibition of mementos from the fifty-year period (1962-2012) of the International Folklore Festival of Lefkas was inaugurated by the Maire of Lefkas mr Kostas Aravanis and the Director of the Hellenic Folklore Research Centre, Academy of Athens mrs Aikaterini Polymerou-Kamilaki, in presence of the Deputy Head of Lefkas Region mr Thodoris Verykios, on Thursday August 16 2012 at the Building of the Cultural Centre of the Municipality of Lefkas.

The design and implementation of an Exhibition dedicated to the “Gifts of the Folklore Festival of Lefkada” had, at least for the curators, two objectives. First, to ensure the best possible presentation of the objects-gifts, and second, to provide and support the synchronic promotion of the polysemantic cross-cultural relations that arise from them.

The Exhibition includes objects that are either directly related to the festival’s events, such as musical instruments, traditional costumes (authentic or not), musical records and cassettes of traditional music, medals, flags or constitute gifts from dance groups that participated in the festival, representative of the country of origin, such as dolls wearing copies of traditional costumes (more or less faithful to the originals), textiles, trays, glasses, souvenirs, tourist brochures, newsletters, etc., small gifts to the organizing body of the International Folklore Festival of Lefkada. It is not so much the objective-material value of the objects that characterizes them but rather the richness of human relations formed between cultural organizations and neighbouring countries during the long and successful life of the International Folklore Festival of Lefkada. During the fifty-year period, a significant number of objects has been accumulated, which, through the voluntary hand of the municipal employees and young scientists under the supervision of the researchers of the Hellenic Folklore Research Centre (henceforth HFRC), are being recorded and documented.

The Exhibition attempts to illustrate the interaction of the people of Lefkada with its guests that has developed for half a century in the context of the Festival, and is reflected in a range of material objects serving as mementos of intangible cultural partnership. The use of representational images and soundscapes of the Folklore Festival at the exhibition venues weaves, so to speak, the canvas for the presentation of objects, while at the same time forms a new field of complementary information that reconstructs its physiognomy. Following modern considerations for the provision of overlapping information, which - directly or indirectly – unite gifts and festival events, we attempt to go beyond a simple viewing. The formation of the cultural environment will allow visitors to be immersed in the wider processes and relationships produced by the festival during its fifty-year lifespan.  In particular, what is anticipated from those directly involved in the festival (organizers and participants), beyond the phenomenology of viewing, is the activation of various processes recalling lived experiences from the past through the feedback of memory.

The HFRC, which in recent years has been conducting a research program in Lefkada in cooperation with the municipality (and Regional Union, former Prefecture) of Lefkada, to satisfy a request from the Cultural Center of the Municipality, and to facilitate the scientific research and design of an organized, modern Depository-Museum of the Folklore Festival, has digitized all the printed programs of Literature and Arts Festival in Lefkada / Folklore Festival of Lefkada (2,300 pages in toto), free of charge for the Municipality of Lefkada, and is currently classifying the material (objects, printed documents, music records, recordings, etc.), while preparing a detailed catalogue. In particular, for the creation of the exhibition commemorating fifty years of the International Folklore Festival, a number of sound documents, film clips, and photographs were utilized, as a canvas for the presentation of the chosen material.

Folklorism, a phenomenon of modern civilization, and its multiple manifestations, such as the Festival of Traditional Dances, constitute a research subject of Folklore, which aims to record and study all the events of folk culture, tangible and intangible. The HFRC, a national body for the documentation of popular and folk culture, in the context of its multiple activities, records and studies the oldest Folk Festival in Greece as an important sociocultural phenomenon and especially interesting research topic. The Festival of Lefkada is now considered one of the major global cultural events of its kind, and attracts the attention of institutions and individuals active in the promotion and management of popular culture with emphasis on traditional music and dance. The festival’s long and continuous presence, which has brought together, for fifty consecutive years, local and foreign volunteers, artists and performers, is inextricably linked to Lefkada.

Thus, the design and creation of the Museum of the Festival constitutes for the exhibition curators (researchers at the HFRC of the Academy of Athens), the basis for creating a vibrant cultural agency, which, following contemporary theoretical approaches, will be responsible for the mediated experience, and also the understanding of the ambivalent relationship among popular culture, tradition and folklore, and lead to the renewal of the festival.